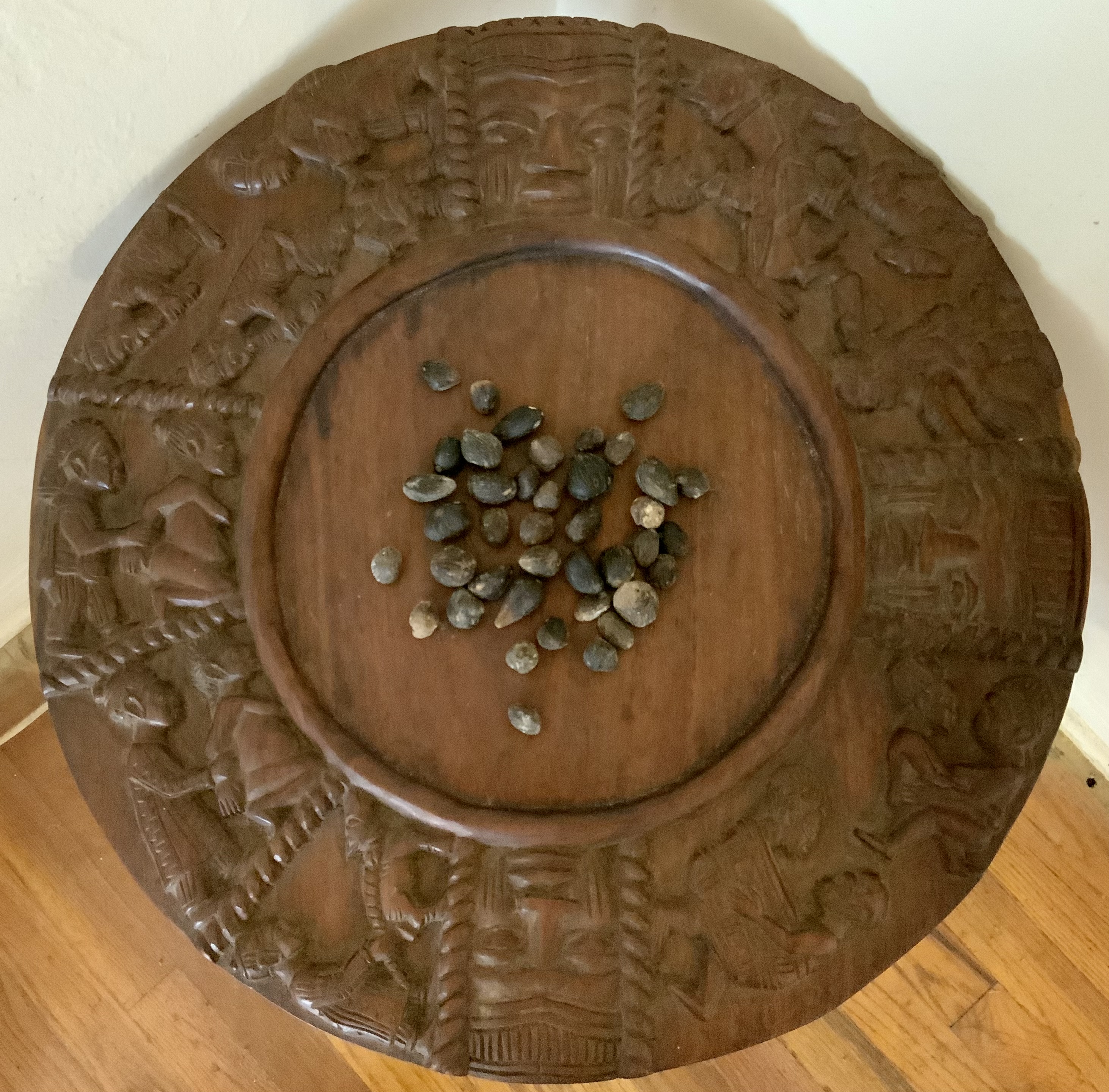 Opon Ifa (divination tray) and ikin (sacred palm nuts).  These are two of the most important resources for Ifa divination.

We have a "Bible" too.  Just as the Tanakh, Christian Bible and Koran are considered to be sacred texts,  so too, is the Holy Odu of West Africa. Parable, proverbs and prescriptions.  How to read, interpret and apply these wisdom teachings.

The order of seniority and metaphysical principles for the single legs of Odu Ifa are as follows:

1. Ogbe, the Supporter- is the manifestation of pure light. It is the expansion of light from source outward. In practical terms it is movement without opposition or an open road. Ogbe as an expression of spiritual growth represents perfect alignment with destiny. Ifa teaches that every person chooses a destiny before returning to earth in the cycle of reincarnation (atunwa). Ifa teaches that if a person lives in harmony with their destiny Nature will provide a blessing of long life, abundance and family. Failure to live in harmony with destiny generates illness, poverty and isolation. Ifa teaches that if a person is unsure about their destiny they should live in alignment with the principles of good character because everyone is believed to be inherently good. When a person is in perfect alignment with their destiny the most imminent problem is the possibility of moving out of alignment. When Ogbe appears it brings an admonition to remain vigilant in the process of manifesting good character. The negative manifestation of Ogbe in personal terms is arrogance.

2. Oyeku, the Mother of the Spirit of Death - is an elision of the phrase O yeye Iku meaning, Spirit of the Mother of Death. In simple terms Oyeku is darkness, the complete contraction of matter into what physics calls a black hole. In human terms this can mean physical death. More commonly it refers to the end of a cycle. When a baby is born there is an end of a cycle of living in the womb. When a teenager becomes an adult there is the end of the cycle of dependency on the parents. In Ifa the end of life on earth marks the beginning of life in the realm of the ancestors (Orun). The Yoruba word for black is dudu and is associated with Oyeku as a symbol for the invisible dimension, the Source of Creation. Oyeku as the end of cycle can bring a blessing of peace. In its negative manifestation, Oyeku represents a premature ending of a cycle that may not result in full maturity or benefit.

Key Phrase: Oyeku creates an end to a cycle.

3. Iwori, the Deep Seer -  is an elision of iwa ori meaning the character of consciousness, or the inner essence of consciousness. Ifa teaches that all things in the universe have some form of consciousness. The word Iwori implies an association with the process of Consciousness forming its own unique identity. In psychological terms this is called individualization. In Ifa the concept of Iwori is associated with spiritual transformation symbolized by the element of fire. In practical terms, Iwori is the fire of passion. Passion can often lead to conflict. In positive terms conflict can lead to resolution and growth. In negative terms conflict can lead to more conflict and defeat. Passion is also associated with the drive towards procreation.

4. Odi, the Seal - is the Yoruba word for female reproductive organs and the process of giving birth. In Ifa cosmology all birth, after the initial moment of Creation, is rebirth. In human terms rebirth refers to reincarnation (atunwa). In practical terms it is the creation of new form from inadequate or obsolete structures. In its negative manifestation Odi is a desperate attempt to hold on to the past.

5. Irosun, the Resounding Osun - is the Yoruba word for menstrual blood. It is a reference to ancestral lineage. If teaches that reincarnation most frequently occurs within the immediate family of the child. Irosun in its positive manifestation represents the effective use of genetic inheritance and family guidance (fulfillment of potential). The negative manifestation of Irosun is either resistance to ancestral support, or self-denigration (resistance to developing potential).

6. Owonrin, the Reversed Head - is a reference to the principle of chaos in the universe. Physics teaches that all seemingly orderly events appear increasingly chaotic when viewed up close. Physics also teaches that seemingly random effects show signs of order when viewed from a distance. The negative aspect of Owonrin is unexpected disruption destroying a weak foundation. The positive aspect of Owonrin is the ability to deal with change and to see things from a new perspective.

7. O'bara, the Resting and Hovering One - means strength, or spirit of strength. The negative manifestation of strength is the desire to force personal will on others. Ifa teaches that inappropriate manifestation of personal will is the foundation of egotism. As a rule of consciousness, egotism is based on an inflated sense of self. It is the opposite of humility, which is based on the willingness to consider the opinions of others. All egotism must, at some point, come face-to-face with reality (the individual is not the center of the universe). This confrontation can lead to either growth or self-destruction. Humans will never become stronger than the Forces of Nature that created human consciousness. Understanding this principle is the foundation of the Ifa concept of good character.

8. Okanran, the Beater of Sticks and Mats - means coming from the heart. Ifa teaches that spiritual growth occurs as a result of balance between the head and the heart known as on tutu (harmony between thought and emotion). The antidote from the egotism that can occur in O'bara is the humility that can be created in Okanran. When experience teaches us that our perception of the world is in error, consciousness begins a quest for the truth of the matter. This is the death and rebirth cycle that is the foundation of all initiation. In social terms this cycle is often represented by the voice of the prophet. In negative terms Okanran represents constant change based on emotional responses that are not grounded in conscious reflection.

9. Ogunda, the Creator - is an elision of Ogun da meaning the Spirit of Iron creates. Ogunda is symbolized by the idea of clearing a path or opening a road. Historically it is associated with the process of organizing social structures into cities and towns. On a personal level it is associated with progress towards fulfillment of destiny. The negative manifestation of Ogunda is destruction without intent.

10. Osa, the Spirit of Sa/Oya - is the manifestation of sudden unexpected change. Owonrin is the chaos built into the structure of a form i.e. old age, and latent disease. Osa is the influence of outside factors that disrupt or destroy a particular form. Symbolically Osa is associated with thunderstorms, hurricanes, volcanoes and those destructive forces in Nature that transform everything in their wake. As a Force in Nature Osa has a cleansing transforming effect. In personal terms Osa can represent a drastic change that leads to abundance. In negative terms Osa can represent someone who is constantly running away from responsibility, which can lead to various forms of mental illness.

11. Ika, the Controller - means drawing in or pulling together. In spiritual terms it refers to a gathering of personal power (ase). Personal power becomes manifest through the use of invocation or through the use of the power of the word. Ika in a positive manifestation can be the source of personal power used for protection, healing, transformation and the creation of abundance. It is the fundamental element in the process of self-affirmation. The negative manifestation of Ika is the source of self-hexing, gossip and unfair denigration of the other.

Key Phrase: Ika creates development of the power of the word.

13. Otura, the Comforter - is the source of mystic vision. Mystic vision places the on (consciousness) in proper alignment wit Source (Olodumare). Otura is the foundation of an individual's sense of destiny and purpose in the world. In its negative manifestation it can be the source of an inflated sense of self importance. Otura may also manifest as identification with something other than Source. The most common forms of mis-identification are greed, nationalism, racism and moral superiority.

14. Irete, the Crusher - is an elision of ire te meaning to press or create good fortune. In  personal terms Irete is stubborn determination to create abundance and to move towards self-transformation. When this stubbornness is directed towards inappropriate goals it becomes the foundation for resistance to change.

16. Ofun, the Giver - literally means the Spirit of White. The reference is to white light as the Source of all material manifestation. Everything we see in the physical world is literally created by light. Ofun is the source of phenomena or manifestation in the universe. It is the kind of manifestation that often is perceived as a miracle or as the answer to those prayers offered in Ose. In its negative manifestation, Ofun is the creation of phenomena through invocation that is contrary to the ideas of harmony and balance that sustains spiritual growth.

Key Phrase: Ofun creates the answer to prayers manifesting as a miracle. 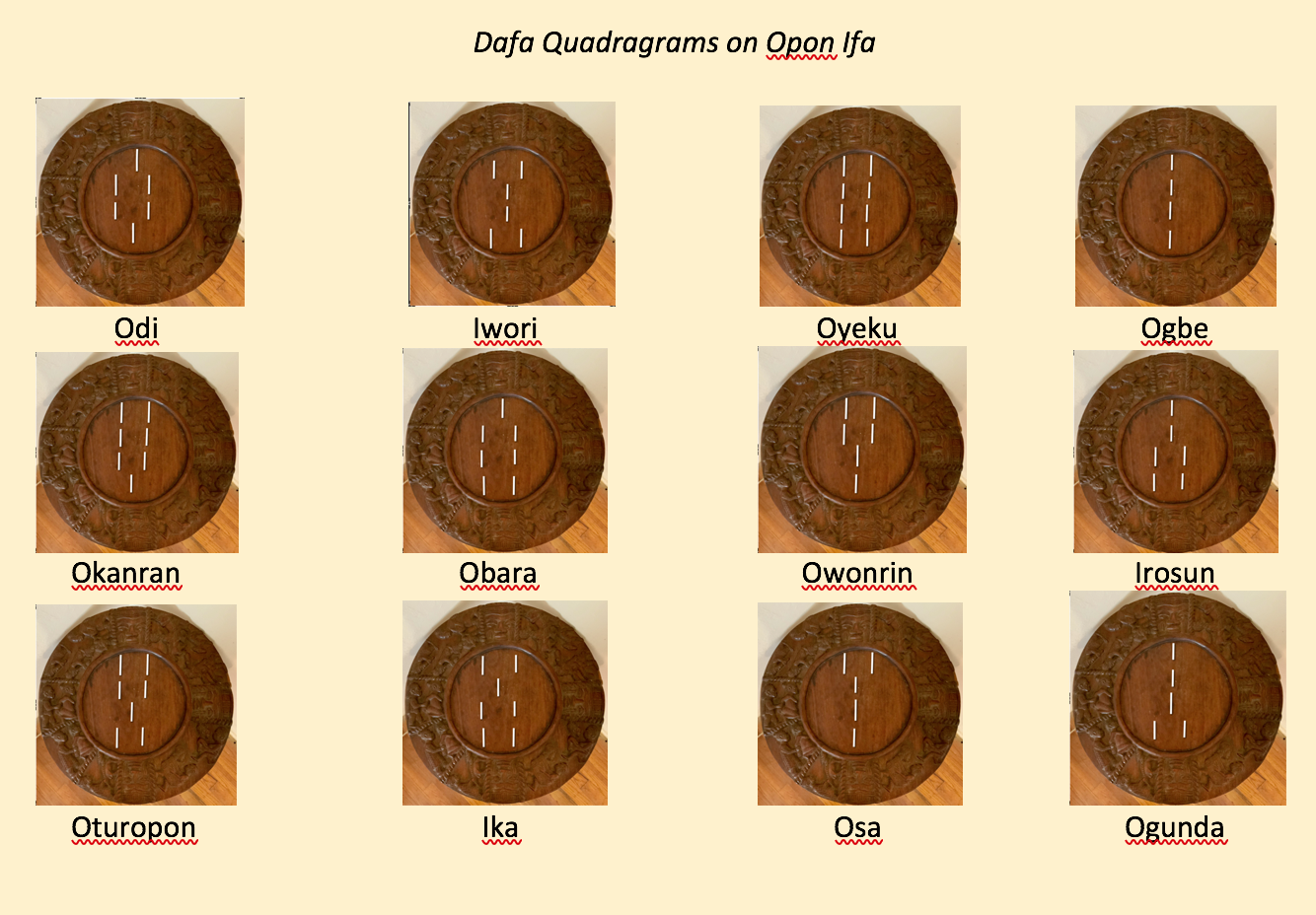 Created by Will Coleman, Ph.D. and Brad Ost. The sixteen holy oju odus.  Read the from top to bottom and right to left.